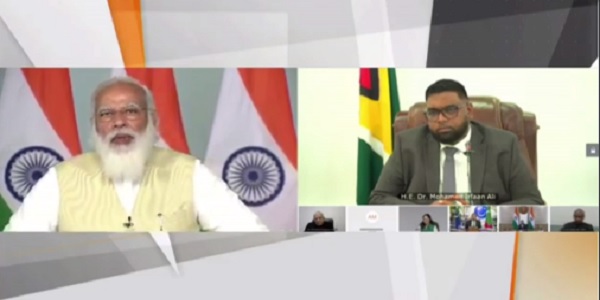 Addressing the event, the Prime Minister congratulated TERI for sustaining this momentum and said that Global platforms like this are important for our present and future. He said that two things will define how the progress journey of humanity will unfold in the times to come. First is the health of our people. Second is the health of our planet, both are inter-linked.

He said that we have gathered here to talk about the health of the planet. The scale of the challenge we face is widely known. But, conventional approaches cannot solve the problems we face. The need of the hour is to think out of the box invest in our youngsters and work towards sustainable development.

The Prime Minister emphasized climate justice for fighting against climate change. Climate justice is inspired by a vision of trusteeship- where growth comes with greater compassion to the poorest. Climate justice also means giving the developing countries enough space to grow. When each and every one of us understand our individual and/ collective duties, climate justice will be achieved.

He said that India's intent is supported by concrete action. Powered by spirited public efforts, we are on track to exceed our commitments and targets from Paris. We are committed to reducing the emissions intensity of GDP by 33 to 35 percent from 2005 levels. He also shared that India is making steady progress on its commitment to Land Degradation Neutrality. Renewable energy is also picking speed in India. We are well on track to setting up four fifty gigawatts of Renewable Energy generating capacity by Twenty Thirty.

The Prime Minister said that sustainable development is incomplete without equitable access. In this direction too, India has made good progress. In March 2019, India achieved nearly a hundred percent electrification. This was done through sustainable technologies and innovative models. He highlighted that through the Ujala program, three sixty-seven million LED  bulbs became a part of people's lives. This reduced over thirty-eight million tonnes of carbon dioxide per year. The Jal Jeevan Mission has connected over thirty-four million house-holds with tap connections in just about 18 months. Through the PM Ujjwala Yojna, more than 80 million households below the poverty line have access to clean cooking fuel. We are working to increase the share of natural gas in India's energy basket from 6 percent to 15 percent, he added.

The Prime Minister pointed out that often discussions on sustainability become too focused on green energy but green energy is only the means. The destination we seek is a greener planet. Our culture's deep respect for forests and green cover is translating into outstanding results. He also said that our mission to achieve sustainable development also includes special attention to animal protection. He shared that in the last five to seven years, the population of lions, tigers, leopards, and Gangetic river dolphin has gone up.

The Prime Minister drew the attention of the participants on two aspects: Togetherness and Innovation. He said that sustainable development will only be achieved by collective efforts. When every individual thinks of national good, When every nation thinks of global good, That is when sustainable development will become a reality. India has made an effort in this direction through the International Solar Alliance. He urged all participants to keep our minds and nations open to best practices from all over the world.

Regarding innovation, he said that there are many start-ups working on renewable energy, environment-friendly technology, and more. As policymakers, we should support as many of these efforts. The energy of our youth will certainly lead to outstanding results.

The Prime Minister specifically mentioned disaster management capabilities. He said that this requires a focus on human resource development and technology. As part of the Coalition for Disaster Resilient Infrastructure, we are working in this direction. He assured that India is ready to do whatever possible to further sustainable development. Our human-centric approach could be a force multiplier for global good.