This award is testimony to JSHL’s commitment and innovative efforts towards sustainability and energy conservation in its overall manufacturing process. 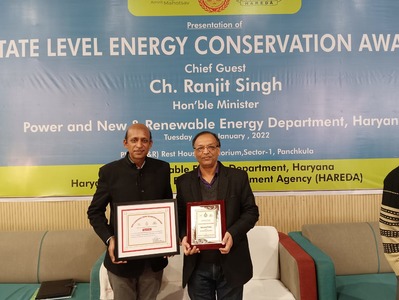 This award is testimony to JSHL’s commitment and innovative efforts towards sustainability and energy conservation in its overall manufacturing process.

The Company received this award, along with a cash prize of 50,000/-, from Cabinet Minister, Government of Haryana, Chaudhary Ranjit Singh in the category of Innovation at an event held in Panchkula on January 11, 2022.

We firmly believe in adopting latest technology and optimising our processes to fulfill our energy conservation objectives. I congratulate the entire team at JSHL for continuously taking strides towards achieving sustainable goals and reducing harmful emissions.’

Over the last five years, JSHL has reduced its specific energy consumption by more than 11%, while reducing overall GHG emission by 21,362 metric tonnes per annum.

Further, JSHL has set an organizational target to reduce its carbon emissions by 10% by 2025. Along with a keen focus on process improvements, the Company has augmented its energy conservation efforts by undertaking renewable energy measures like solar power plant installation.

This is the nodal agency to implement the numerous centrally and state-sponsored schemes and projects in the area of renewable energy in the state of Haryana.