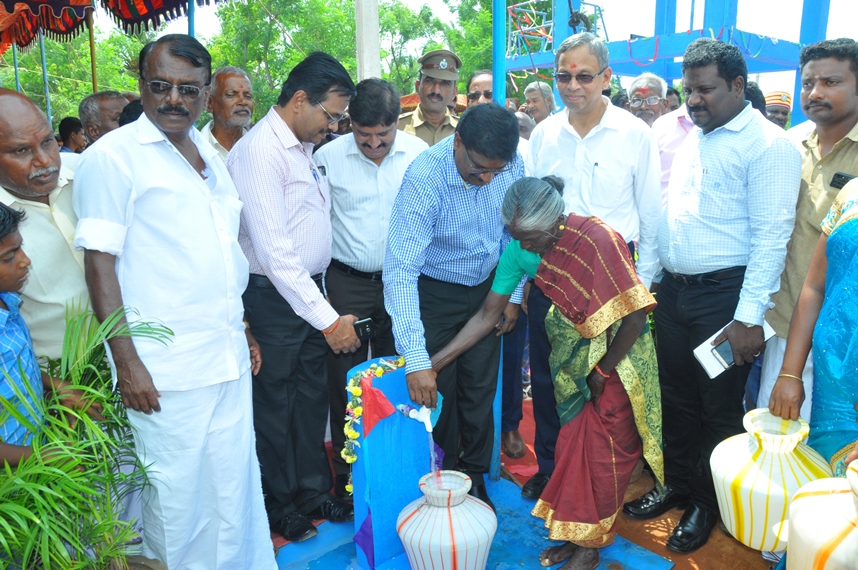 To demonstrate the core values of Care & Trust, Indian Oil Corporation Limited (IOCL), Southern Region Pipelines (SRPL) is reaching out to the  water scarce Pipeline RoW villages in backward districts of Tamilnadu through its Corporate Social Responsibility (CSR).  In Pudukottai District, IOCL has conducted baseline survey for 11 villages and based on the need analysis 2 villages namely Mandaiyur & Easwarankoil, which were identified for their need of drinking water as  they fetch  water from farther distances . Accordingly based on the study, IOCL, SRPL has provided 2 nos. of Borewells, constructed  2 nos of  30000 L  Over Head Water Tanks and laid more than 2 Km piping network and delivery taps near to the households with a  total project cost of Rs. 40 Lakh.
On 25.1.2018, the drinking water CSR project been dedicated to the community by Shri S. Ganesh, IAS, The District Collector, Pudukottai & Sh. D.S. Nanaware, Executive Director (SRPL) in a grand function participated by villagers from both the villages. This project was formally handed over to the communities at Mandaiyur & Easwarankoil villages  in the august presence of Senior District officials, Police officials, Block & village officials. IOCL officials, Sh. S. Sunder, Chief General Manager (O), SRPL, Chennai, Sh. S.S. Chourasia, DGM(O), SRPL, Trichy & Sh. P. Rama Kishore, DGM (CSR), SRPL, Chennai  were present during the function and they have interacted with the district officials & beneficiaries. The water network in both the villages reaches directly near to 200 households and indirectly it caters to the entire of village of more than 4000 population
ED (SRPL) in his address has stated that IOCL is always committed towards the society and the villagers are direct stake holders of the corporation. District Collector, Pudukottai,  Sh. S. Ganesh, IAS  in his address has lauded efforts of IOCL, in bringing water near the households  and further he ensured that the necessary operation and maintenance shall be taken up by the respective villages / blocks. Further he elaborated the benefits of oil pipelines and how pipelines are protecting environment by avoiding truck / train movements. He reaffirmed that IOCL is a PSU and  everyone is part of it, we shall provide assistance to them whenever required along the pipeline. The villagers from the two villages have expressed their happiness and stated that the water availability reduces their day to day toil.
Project Director, District Rural Development Agency (DRDA), Pudukottai  & Deputy  Superintendent of Police (DSP), Pudukkottai have thanked IOCL for its commitment towards society.

PFC to provide PPE Kits and ambulances to Government of Uttarakhand

New Delhi: In yet another step to fight the COVID-19 pandemic, state-owned Power Finance Corporation Ltd (PFC) has come forward to provide financial assistance of rs. 1.23 crore to the Government of Uttarakhand.    The fund will be utilized for procurement of 500 PPEs Kits for frontline
Posted Date :  30-05-20