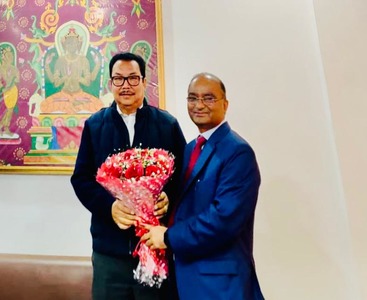 He informed, that pursuant to efforts of Sh. R.K. Singh Union Minister of Power, the State Govt of Arunachal Pradesh has accepted allotment of 05 Hydro Electric Projects having total capacity of 5097 MW to SJVN, for which MOU would shortly be signed. Sh. A.K. Singh, Director (Finance), SJVN, was also present during the meeting.

Sh Sharma stated that he has always been advocating the concept of Integrated River Basin Development Approach, wherein allocation of Hydro Projects in One Single River Basin to One Developer would enable optimum utilization of Manpower, Infrastructure and Financial Resources. He expressed satisfaction that this novel concept has been accepted by Govt. of Arunachal Pradesh in allocation of these Projects.

He stated that development of these Projects involving tentative Investment of Rs 60,000 Crore, would be commissioned by SJVN in the next 8-10 years. He mentioned that on commissioning, these Projects are expected to generate about 20,000 Million Units of clean energy annually on cumulative basis.

The Detailed Projects Reports of some of these Projects have already been prepared while some Projects are in under Survey & Investigation Stage.Sh. Sharma stated that with allotment of these Projects, SJVN shall have significant footprint in the North Eastern Region of the country enabling SJVN to be part of development process of the Region.

SJVN is a leading power CPSE having a diversified portfolio in the field of Hydro, Solar, Wind, Thermal and Power Transmission across India and neighboring countries of Nepal & Bhutan.

The company has seen exponential growth in recent years and now has 41 Projects under various stages of development with a capacity of more than 16000 MW.