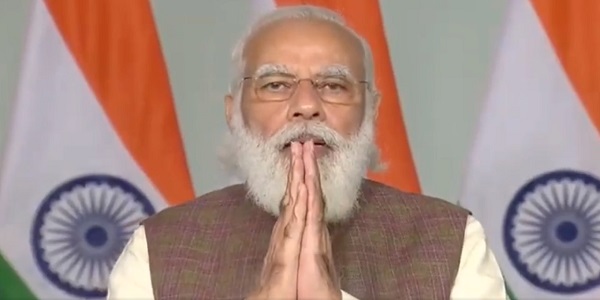 New Delhi: Prime Minister Shri Narendra Modi will launch the 'Jal Shakti Abhiyan: Catch the Rain' campaign via video conferencing to mark ‘World Water Day’ and spread awareness towards water conservation, today. On the occasion, an MoA also will be signed between the Union Minister of Jal Shakti and the Chief Ministers of Madhya Pradesh and Uttar Pradesh to implement the Ken Betwa Link Project, the first project of the National Perspective Plan for interlinking of rivers.

"Tomorrow, on World Water Day, the 'Catch the Rain’ Movement would be launched at 12:30 PM. This movement will take place across India based on the theme of 'catch the rain, where it falls when it falls.’ It will strengthen water conservation efforts happening in our country," he wrote on Twitter on Sunday.

The Campaign will be undertaken across the country, in both rural and urban areas, with the theme “catch the rain, where it falls, when it falls”. It will be implemented from 22nd March 2021 to 30th November 2021 - the pre-monsoon and monsoon period in the country. It will be launched as a Jan Andolan to take water conservation at grass-roots level through people’s participation. It is intended to nudge all stakeholders to create rainwater harvesting structures suitable to the climatic conditions and subsoil strata, to ensure proper storage of rainwater.

The agreement heralds the beginning of inter-state cooperation to implement the vision of Former Prime Minister Shri Atal Bihari Vajpayee to carry water from areas that have surplus water to drought-prone and water deficit areas, through the interlinking of rivers. This project involves the transfer of water from the Ken to the Betwa River through the construction of Daudhan Dam and a canal linking the two rivers, the Lower Orr Project, Kotha Barrage, and Bina Complex Multipurpose Project. It will provide annual irrigation of 10.62 lakh ha, drinking water supply to about 62 lakh people, and also generate 103 MW of hydropower.

The Project will be of immense benefit to the water-starved region of Bundelkhand, especially to the districts of Panna, Tikamgarh, Chhatarpur, Sagar, Damoh, Datia, Vidisha, Shivpuri, and Raisen of Madhya Pradesh and Banda, Mahoba, Jhansi and Lalitpur of Uttar Pradesh. It will pave the way for more interlinking of river projects to ensure that scarcity of water does not become an inhibitor for development in the country.

World Water Day is an annual United Nations (UN) observance day held on 22 March that highlights the importance of freshwater. The day is used to advocate for the sustainable management of freshwater resources. The theme of each day focuses on topics relevant to clean water, sanitation, and hygiene (WASH), which is in line with the targets of Sustainable Development Goal 6. The UN World Water Development Report (WWDR) is released each year around World Water Day.

New Delhi: The Chief of Defence Staff General Bipin Rawat today called on the Prime Minister. They reviewed the preparations and operations being undertaken by the Armed Forces to deal with the pandemic.   The CDS briefed the PM that all medical personnel from armed forces who have retire
Posted Date :  26-04-21

New Delhi: In line with the Prime Minister’s direction of boosting the availability of oxygen to hospitals, the PM CARES Fund has given in-principle approval for allocation of funds for installation of 551 dedicated Pressure Swing Adsorption (PSA) Medical Oxygen Generation Plants inside public
Posted Date :  25-04-21

New Delhi: The Prime Minister chaired a meeting to review steps taken to boost oxygen availability in the country. The PM emphasized that there was an immediate need to augment the supply of medical-grade oxygen as well as equipment required for patient care both at home and in hospitals. PM stresse
Posted Date :  24-04-21