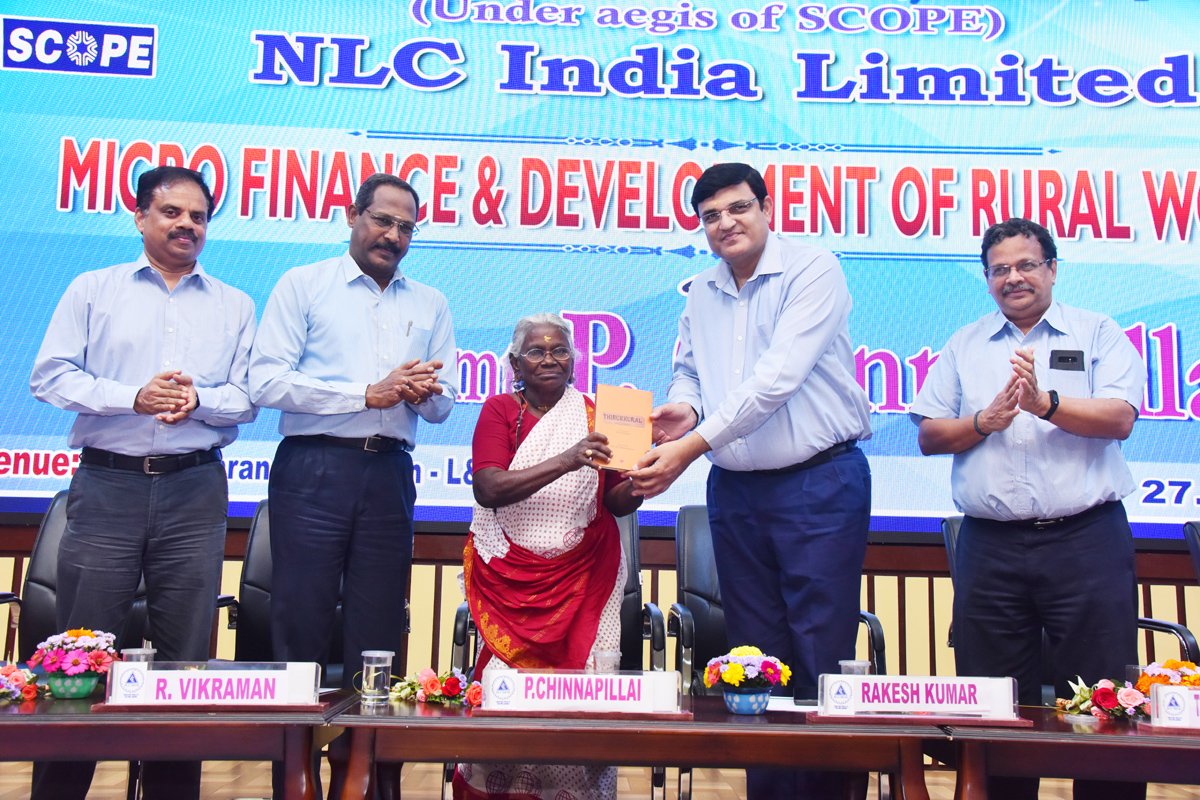 Neyveli: Women in Public Sector (WIPS), Neyveli chapter, under the  aegis of NLC India Limited organized special program on Micro Finance & Development of Rural Women, wherein,  Padmashri Smt. P. Chinna Pillai participated as  Guest  of   Honor  and spoke on the occasion at Neyveli,  on 27.11.2019.
During the occasion, Shri Rakesh Kumar CMD, NLCIL, Shri R.Vikraman, Director (HR) Neyveli Director (Power) and Shri T.Venkatasubramanian, CVO,NLCIL  honoured Padmashri   Smt. Chinna Pillai . Shri R. Vikraman, Director (HR) in his felicitation address, recalled that NLCIL has seen many renowned personalities as guests of the organization, but having Padmashri Smt.Chinna Pillai as guest of honor itself is a proud moment and great motivation for the Neyvelians . He lauded her efforts in making own banking system—Kalanjiam—a microcredit movement, which has empowered hundreds of women and their families. Pullucheri Village has become a model of self-sufficiency, he added. Shri Shaji John,Director (Power) and Shri T.Venkatasubramanian ,CVO,NLCIL also felicitated on the occasion.
Presiding over the function, Shri Rakesh Kumar CMD, NLCIL stated that Padmashri   Smt P. Chinna Pillai is an Iron lady with selfless courage and determination, which  not only helped her but the entire deprived womanhood especially, rural women to successfully come out of their problems and break the bonds of oppression created by vicious circle . Padmashri Smt. P. Chinna Pillai, who hails from Pullucheri village, Madurai, while addressing, recollected her ordeal of how the villagers were exploited by the landlords by lending money at unreasonably high rate of interest, thus making their lives miserable during the year 1990. All the poor villagers, including herself, were engaged as coolies in agricultural fields for six months and the remaining period they did masonry works for the remaining months to eke their living.  At that time, she came in contact with DHAN Foundation which changed their lives. DHAN Foundation was helping to get bank loans at a cheaper rate of interest.  Initially there was lot of hiccups and during day time, she used to interact with women co-workers and the night travel to other villages to explain the need for saving money and formed a Self-Help group called “Kalanjiyam”, wherein an amount of Rs.50, 100 etc. were saved and deposited in bank through DHAN Foundation.  In case of any necessity, the individual will approach the bank for micro financing thus coming out of the shackles of the money lenders.  As a start, 8 “Kalanjiyams”were formed and at present, after nearly 30 years, this “Kalanjiyam”is spread over 16 states throughout India.
“Kalanjiyam” has transformed the lives of many poor women.  It is proud to express that many of them were able to educate their children, conduct marriages and meet hospital expenses for aged people.  Pregnant women were given utmost importance and through “Kalanjiyam” at present, we are running “SUGAM” hospitals - three at Madurai and one at Salem.  She recollected how she shunned an offer of a pucca concrete house by late Chief Minister, Shri M. Karunanidhi and former Prime Minister, Shri Vajpayee, stating her co-workers are living in a hut and simply she cannot have the luxury. Even today she lives in a small hut.
She lauded NLCIL for its CSR initiatives and said, she was very much impressed by the  SNEHA,  a school for differently abled children and Ananda illam,  a home for elderly people, run by NLCIL and expressed her desire to run a similar one in Madurai. Lastly, she requested the NLCIL to care for the elders, disabled and the poor people.To partake in her relentless services for the betterment of the society, NLCIL Management has announced a grant of Rs.2. Lakh to the Development of Humane Action (DHAN) Foundation, a professional development organization wherein,  Padmashri Smt. Chinna Pillai is leading the Movement.Earlier Smt. M.Vijayalakshmi President, Secretary WIPS Neyveli chapter welcomed the gathering and Smt N.Rama Lakshmi, General, Secretary WIPS Neyveli chapter rendered vote of thanks.

RCF Conferred with National Awards for Excellence in PSU

New Delhi: It’s a matter of pride that RCF, Trombay Unit is conferred with National Awards for Excellence in PSU for its efforts on Environmental Sustainability (Green Initiatives) & Environment & Sustainability by World HRD during awards ceremony conducted on virtual platform.
Posted Date :  22-10-20

New Delhi: NMDC bagged this Golden Trophy in Category - A for the 1st time, earlier it has received a Silver trophy for HR Best Practices and for being a proud employee affinity company.     NMDC Limited, (formerly National Mineral Development Corporation), is an Indian publ
Posted Date :  22-10-20

NSIC Conferred with National Award for Excellence in PSU

New Delhi: NSIC conferred with the "National Award for Excellence in PSU” (CSR Initiatives- Social Development) on 14th October, 2020.   NSIC has been working to promote, aid and foster the growth of micro, small and medium enterprises in the country. NSIC operates th
Posted Date :  15-10-20

New Delhi: ITI Limited Bags National Awards for Excellence in PSU to immensely support and contribute towards the activities of Nation Building through HR, ITI Limited is conferred with “CEO with HR Orientation Award” and “HR Excellence Award” at a prestigious online a
Posted Date :  15-10-20

New Delhi: Rajasthan Electronics and Instruments Limited (REIL), Jaipur conferred with the "10th PSE Excellence Award" in the Research and Development (R&D) and Innovation category. This prestigious award had been given on the digital platform to Shri Rakesh Chopra, Managing Director, REIL by the
Posted Date :  12-10-20

Sambalpur: Lakhanpur Area of Mahanadi Coalfields Limited (MCL) has been awarded First Prize by the Ministry of Coal for outstanding contribution and performance during Swachhata Pakhwada in year 2019. As per communication from Mr Anupam Lahiri, ISS, Deputy Director General, Ministry of Coal,
Posted Date :  07-10-20