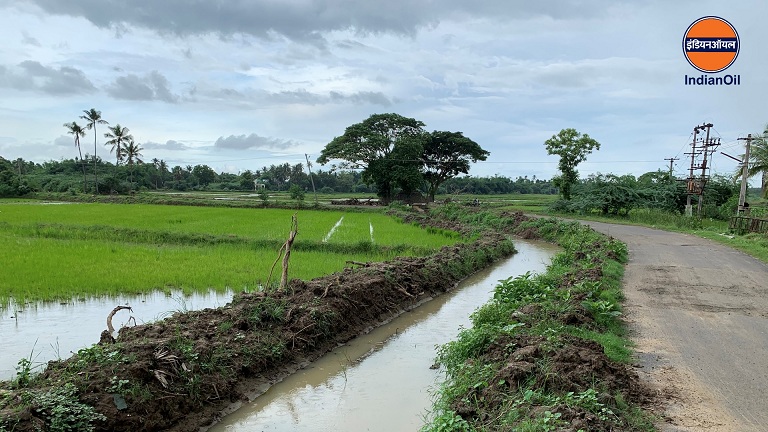 Thiruvarur:  Reaching out to the farming community, IndianOil, under Corporate Social Responsibility (CSR), has restored after de-silting 9.35 km canal network in Moolangudi village, Thiruvarur District of Tamil Nadu. The canal, blocked and chocked for past five years, has been brought back to life by restoring flow of water to the farm fields of hundreds of farmers. In addition, de-silting of canals lead to better ground water availability.
Moolangudi is a revenue village falling under Nannilam taluk of Tiruvarur district in Tamil Nadu. IndianOil is implementing a natural gas pipeline to Cauvery Basin Refinery through this village. The village has a population of 988 with 238 households and 71% population belongs to deprived community.
The livelihood of the villagers are dependent predominantly on agriculture. The soil in this village is suitable for growing paddy, green gram and horse-gram among other crops. Agriculture in Moolangudi is largely dependent on water released from Cauvery River from Kallanai Dam in Trichy and further dependent on water from bore wells. Cultivation in Moolangudi village is carried out throughout the year.
But from past five years, the 5.35 km long Moolangudi ‘main canal’ from one of the Cauvery rivulets and eight sub canals, namely, Nadhuma Canal, Pallantrangal Canal, Pappanadhi Vaikal, School Vaikal, Field Vaikal, Vadumbu Canal, Moovalai Channel and Odai Channel of combined length of 9.35 km have been lying chocked as there has been no maintenance or no de-silting of these canals for restoring the water flow. Due to this, villagers were facing difficulties in cultivating the land thereby their livelihoods were affected. Further, the poor condition of the canals caused to flooding in upstream areas during heavy rains.
Based on the need, IndianOil, Southern Region Pipelines (SRPL) decided to take up restoration work under CSR at a cost of about Rs. 10 lakh to benefit entire farming community in Moolangudi village, which is dependent on this main Canal. IndianOil, after meeting the village authorities, respective government departments and District Collector, has taken up the restoration activities for the entire length in two phases. In first phase the ‘main canal’ was taken up for de-silting and restoration and in second phase sub-canals were taken up under Corporate Social Responsibility.

Singrauli: With a motive to provide quality educational infrastructure, Northern Coalfields Limited (NCL) has constructed a primary school building at Village Misira under its CSR initiative. General Manager of the company’s Krishnasila Project inaugurated the school building and assured all po
Posted Date :  14-02-20

New Delhi: CIL organised a “Cancer awareness camp” for women at Pathakhera regional hospital, Western Coalfields Ltd. One of the most effective ways to fight cancer is to detect it in the early stages when it is treatable.   The doctors educated the women about the symptoms to look o
Posted Date :  13-02-20

REIL organized a workshop on empowerment and leadership development

JAIPUR. A workshop on Women Empowerment & Leadership Development was organized for all women participants on 04 February 2020 in the newly constructed building 'REIL House' Auditorium of Rajasthan Electronics & Instruments Limited. The program was formally launched by the Managing Directo
Posted Date :  06-02-20

New Delhi: As a fitting tribute to Bapu, on martyrdom day of Father of the Nation, NBCFDC sanctioned a program for "Rescue and care of Homeless from the Streets of Delhi" under its CSR initiative.   Under this initiative two rescue vans will be functional and can be accessed 24X7 at 011-
Posted Date :  03-02-20

New Delhi: Under the 2nd phase of the OIL CSR Project Jeevika, a programme was recently convened at Diyun Circle  with the two primary objectives of (a) distributing bee boxes and colonies (12 bee boxes and 12 bee colonies to 100 beneficiaries each) and (b) Certificate distribution / Valedictor
Posted Date :  03-02-20

A CSR initiative of NRL

New Delhi: NBCFDC organised a medical camp for extending the benefit of free health check up and medicines for Transgenders community at Vijayawada, Andhra Pradesh on 28-01-2020 in collaboration with its partner HLFPPT. 53 patients registered and 432 OPDs conducted. NBCFDC officials also atte
Posted Date :  31-01-20