The Minister urged investors to step up participation in the fully transparent auction process evolved by the Coal Ministry. 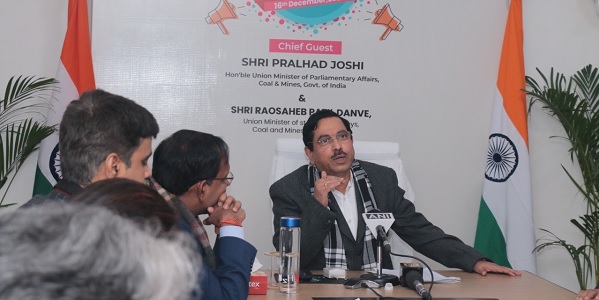 Union Minister of Coal, Mines and Parliamentary Affairs Shri Pralhad Joshi has launched the fourth tranche of auction of 99 coal mines including 24 new mines in a function Yesterday on December 16, 2021. Launching the latest tranche, the Minister called upon the investors who have already completed successful bidding of coal mines to start production at the earliest for greater self-reliance in this sector. Minister Shri Joshi also urged the officials to identify more coal blocks for auctioning. Shri Joshi further pointed out that at least for next 30 to 40 years coal will continue to be crucial in India’s energy sector. The Minister urged investors to step up participation in the fully transparent auction process evolved by the Coal Ministry.

Of these 99 mines on offer, 59 are fully explored mines and 40 are partially explored. These mines are spread across eight coal bearing states of Jharkhand, Chhattisgarh, Odisha, Madhya Pradesh, Maharashtra, West Bengal, Andhra Pradesh and Telangana.

The list of mines has been finalized post detailed deliberations and mines falling under protected areas, wildlife sanctuaries, critical habitats, having forest cover greater than 40%, heavily built-up area etc. have been excluded.

Key features of auction process include introduction of National Coal Index, ease in participation with no restriction for prior coal mining experience, full flexibility in coal utilisation, optimized payment structures, efficiency promotion through incentives for early production and use of clean coal technology. Further incentives are being contemplated by the Ministry of Coal with focus on sustainability.

SBI Capital Markets Limited, sole Transaction Advisor to Ministry of Coal for the commercial coal mine auction, had devised the methodology and is assisting the Ministry of Coal in conduct of the auction.