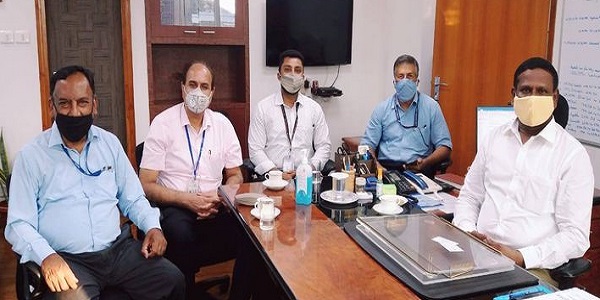 RED-NER met Shri Sanjay Kumar, GM (Comm.) & his team from Pawan Hans Ltd (PSU Connect)
New Delhi: RED-NER met Shri Sanjay Kumar, GM (Comm.) & his team from Pawan Hans Ltd to discuss Heliports/Helipads that will help connect remote locations in the Northeast.
Heliports play an important role in improving air connectivity under #UDAN in North-East India. This regional connectivity scheme will improve the connection from landing place to air.
A heliport is generally an area of land which is used or intended for use, for the landing and take-off of helicopters.
UDAN (Ude Desh ka Aam Naagrik) is a regional airport development and "Regional Connectivity Scheme" (RCS) of Government of India, with the objective of "letting the common citizen of the country fly", aimed at making air travel affordable and widespread, to boost inclusive national economic development, job growth and air transport infrastructure development of all regions and states of India. At the beginning of the scheme, out of total 486 airports, 406 were participating unserved airports, 27 were well served airports out of 97 non-RCS airports and 12 were operational airports out of 18 participating underserved regional operational airports (Nov 2016) with regular fixed-wing scheduled flights.UDAN scheme will add to this number by expediting the development and operationalisation of India's potential-target of nearly 425 unserved, underserved, and mostly underdeveloped regional airports with regular scheduled flights.